How to Improve Dehydrogenation Process Performance

How to Improve Dehydrogenation Process Performance

Industrial methods for controlling the operation of fluidized-bed dehydrogenation plants normally are quite simple, however, are not always adequate for understanding the troublesome processes running at the plants, resulting in coke formation or in production decrease.

Computational Fluid Dynamics (CFD) modeling, along with the experimental methods for studying and controlling the catalyst fluidized bed at bench-scale and commercial units, shows large potential, and will become widely used provided that availability of sufficient computational capabilities will be increased. The disadvantages of above methods include apparent increase in computation time for a large number of catalyst particles, the inability to take into account any chemical reaction and coke formation. Insufficient computing power of presently available software packages results in significant increase in computational time.

It is worth to dwell on some of above promising techniques that provide real-time information about parameters of flow regime in a gas-solid fluidized beds, outlining their advantages and disadvantages.

The use of microwaves and acoustic techniques is attractive due to the their low cost and absence of effect on fluidization regime [1-4]. However, there are some difficulties involved in calibrating the measurements; the obtained data relate only to thestate of a fluid bed surface.

The advantages of methods for measuring the electric capacitance [5-7], resistance/impedance [8-10], and inductance [11] include their applicability in a wide temperature range (up to about 1000 °С). The disadvantages include the significant distortion of the measured signal by the material of the probe and by edge effects caused by the probe geometry limitations.

As recently as the 1970s, the laboratory-scale evaluation of laser technique, mainly of Laser Doppler Anemometry for monitoring the fluidized bed, was made [12-16]. This method is non-invasive and can be applied at bench-scale test units, however, the method imposes a limitation on the fluidized particle concentration and on a fluidized bed penetration depth for the laser beam.

In recent years, a number of studies have been published on industrial application of tomographic techniques. In addition to positron emission tomography (PET) [17], g-ray transmission [18], and X-ray tomography [19, 20], there is a relatively simple and inexpensive EIT/ECT method [21-24] based on measuring either impedance or electric capacitance. The resulting image shows a 2-D (cross-sectional) distribution of dielectric constant for further image reconstructing of bubbles and in homogeneities within a fluidized bed. Above tomographs are typically simple and comprise a set of circumferential electrodes, between which the parameter is measured, data acquisition device and the processing computer. EIT/ECT is a relatively simple technique, however, its disadvantage lies in possible detecting in homogeneities in a fluidized bed in the resulting image if two gas bubbles are formed too close to each other.

Although utilizing tomographic, acoustic and microwave transmission techniques is not a new idea, and they were applied to laboratory fluid bed hydrodynamics studies as early as in 1960-80s, implementing the non-invasive techniques at bench-scale and industrial pilot facilities appears to be of considerable interest, mainly caused by more sophisticated processes that are not taken into account by laboratory studies of fluidization.

Invasive techniques have an advantage over most non-invasive techniques in that they allow to penetrate into the entire depth of the fluidized bed of the catalyst, but at the same time they affect the convective flows, while there is always the possibility of coke formation on the probe itself, which can disable it. Industrial tomography is free from most of the disadvantages, and therefore is considered as the most promising technique for the insitu monitoring the fluidized bed, as evidenced by numerous current publications in the international scientific journals.

Nowadays, most of the above methods are used only in laboratory and bench-scale systems since not every of them is applicable for industrial fluidized bed plants, without requiring expensive alterations. Furthermore, no single method is universal, so a combination of at least two complementary research and monitoring methods is needed. Nevertheless, the implementing a wide range of advanced knowledge-intensive techniques at the model bench-scale units with relatively low material costs will provide more insight to the processes taking place at the industrial plant and assist in avoiding the “backsliding” to undesirable and inefficient modes of operation.

Today, the method described in the patent № RU 2625880 “Reactor and method of fault diagnostics and optimization ofC3-C5 paraffin hydrocarbons dehydrogenation reactor construction”(the patent owner is Katalizator JSC) is the most applicable to theindustrial process conditions.

The essence of the invention is to collect and process the data obtained from pressure and temperature sensors used at the fluidized bed apparatus. Based on the correct interpretation of pressure and temperature difference data along the apparatus height and area, the important information about hydrodynamic conditions inside the reactor or regenerator can be received. Upon processing these signals by original software, the pattern of catalyst distribution along the apparatus height is obtained including data on catalyst quantity and density for specific section. This allows corrective measures or actions to be taken to achieve process conditions close to plug flow reactor model both for catalyst and raw material.

The use of technology developed by Katalizator JSC for monitoring the fluidized bed state and conditions at commercial dehydrogenation plants will ensure the efficient control of the process, improvement of plant production and economic performance as well as the catalyst consumption ratedecrease. 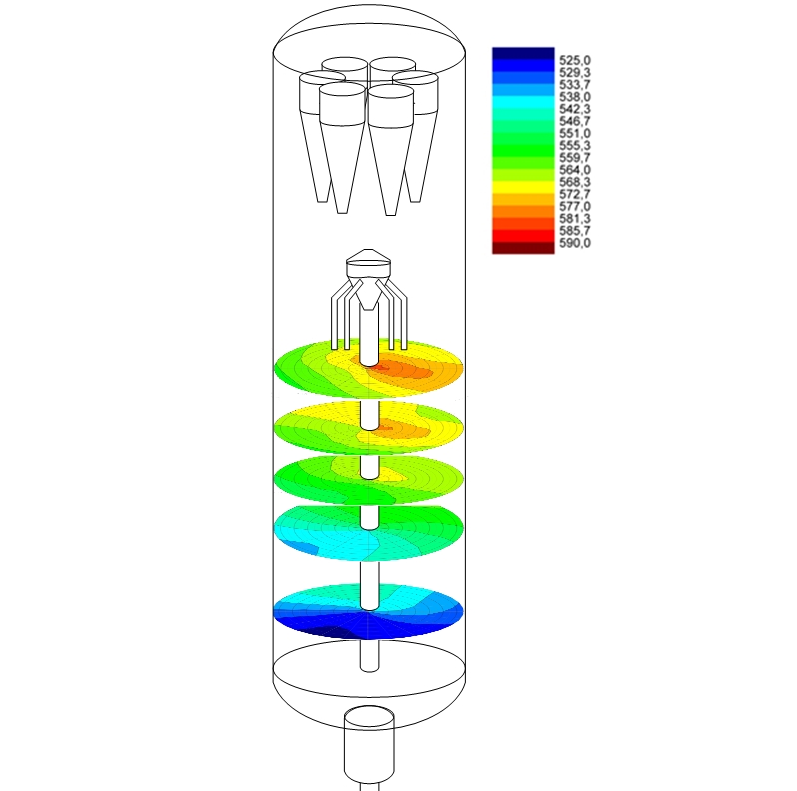