The catalyst for dehydrogenation of ethylbenzene into styrene was created as part of a project to develop a new material for deep processing of alkylaromatic hydrocarbons based on macroporous ferritic systems and create its high-tech production. The project is implemented by JSC SKTB Katalizator together with Kazan Federal University supported by the Ministry of science and higher education of the Russian Federation by the RF Government Decree № 218.

Ethylbenzene dehydrogenation is the main industrial method for producing styrene. Styrene is one of the most important monomers for the polymer industry, the essential part of it goes to the production of polystyrene. The synthetic rubber is derived from the copolymerization of styrene and butadiene. The resulting catalyst has high activity, selectivity and strength.

The production of a domestic catalyst for the dehydrogenation of ethylbenzene into styrene is expected to be focused on import substitution of foreign counterparts at chemical plants in Russia. 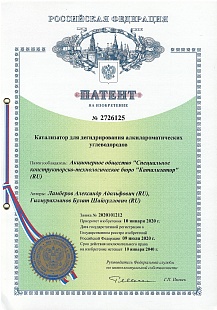