In the sixties the President of the Siberian Branch of the Academy of Sciences of the USSR Mr. M.A. Lavrentiev raised the idea regarding the creation of the “introductions collar” in Novosibirsk city – the set of Scientific and research institute and Development laboratories – for the advancement of scientific ideas and developments into various spheres of life, including the industry and agriculture. In the field of the catalysis this idea was implemented by the Director of the Institute of Catalysis, academician G.K. Boreskov through the creation of the unique testing complex near the Novosibirsk Campus – Special design and engineering bureau of catalysts with pilot production (SKTB Katalizatorov), and this idea was directed to the solution of problems of the industrial catalysis – transition from the scientific idea to its practical implementation.

The Department began its activity at areas of the Institute of Catalysis, and the main operational target of the Department during this period was the preparation of the creative performance staff capable to implement in practical conditions all those things that were received only “in vitro”. Young specialists in chemistry technology from the leading higher education institutions of the USSR were attracted actively. Newly recruited employees were working in departments together and under the leadership of skilled colleagues from the Institute of Catalysis.

At this time there was the method for thermal decomposition of the hydrargillite developed together with the Institute of Catalysis. The SKTB Katalizatorov independently developed the non-standard equipment, including vibrational densitometers, while performing this work.

Construction of the full complex of objects was ongoing during the period from 1971 till 1980. There was experiencing of pilot batches of catalysts being carried out since 1973 while the process of the commissioning of production facilities, when the 1st series of the catalysts preparation equipment was created. 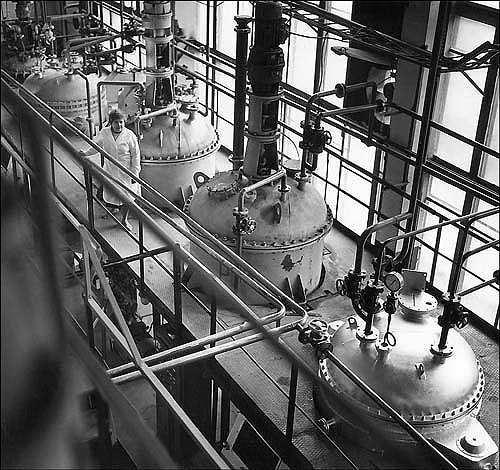 In 1996 the SKTB Katalizatorov together with the Institute of Catalysis have started the development process for creation and mastering of industrial production of advanced carriers for catalysts, including the disperse active oxide of aluminum on the basis of the thermal decomposition method for technical hydrate of alumina according to the draining technology.

Researches in the field of technologies of catalysts preparation, development of separate stages of the technological process, development and mastering of industrial technologies for preparation of catalysts and their carriers, as well as their experiencing by means of pilot and trial batches were the main field of activity of the SDEB of Catalysts. As a result of carried out research & development and designing & engineering works, including those that were carried out together with Institute of Catalysis of the Siberian Branch of the Academy of Sciences of the USSR, there were technologies for preparation of the large amount of carriers, catalysts, sorbents which found application in the industry, including: aluminum oxides carriers and sorbents differing by phase and chemical structure, shape and dimensions of granules; catalysts with ecological appointment; catalysts for creation of protective atmospheres while processing of details in mechanical engineering; vitriolic catalysts; zeolitic catalysts for receiving of liquid hydrocarbonic fuels from methanol and synthetic gas; catalysts for polymerization of ethylene and propylene; aluminum and palladium catalysts for smooth purification of olefins from acetylene and diethenoid matters and many other products. There were energy saving waste-free technologies for preparation of catalysts and flexible technological lines allowing the transfer on production facility settings for new products within the shortest possible time developed. There was the method for preparation of carriers and catalysts with the use of the TMCA (thermos-mechanical and chemical activation of technical alumina hydrate) developed.

There was the target set for SKTB Katalizatorov to develop catalysts instead of imported ones for purchased chemical productions. The SKTB Katalizatorov brilliantly coped with these objectives: there was production facility created and the production of micro-spherical silica gel ИКТ-04-6 serving as the carrier for the catalyst of gas-phase polymerization of ethylene instead of imported catalyst manufactured by “Davison” company, USA; the silver catalyst ИКТ-3-12 for purification of nitrous gases from oxygen during the production of the caprolactam instead of the imported catalyst manufactured by BASF; palladic catalyst ИКТ-3-20 instead of Kotoran imported for the synthesis of herbicide; ИКТ-7-10 catalyst instead of the imported G-32E catalyst by Girdler; oxide and chrome catalyst ОХК-1 (ИКТ-8-9) with the view of replacement of the imported S-2 catalyst for gas-phase polymerization of ethylene, the series of catalysts for production of methionine, including catalysts for Claus process, etc.

Developed catalysts listed above were possessing parameters surpassing those of imported chemicals.

Experts of SKTB Katalizatorovtook part in designing and creation of catalytic productions. So, together with the Institute of Catalysis of the Siberian Branch of the Russian Academy of Science they have developed basic data for designing of industrial manufacturing of vanadic catalysts of oxidation from SO2 to SO3, release of which was organized in Voskresensk Production plant “Minudobreniya”, basic data for designing of the specialized plant of catalysts in Tomsk, catalytic plant in Gomel, production of the active oxide of aluminum at the Odessa superphosphate plant were developed and issued to the research, development and production facility “Plastpolimer”, basic data for creation of industrial production of aluminum oxide catalysts for Claus and Sulfreen process at the Shchyolkovo experimental plant of the Unified Research Institute for Crop Protection Chemicals were developed, the method was developed and the production process was mastered for the product of TMCA (flush-product) at Achinsk Alumina Refinery, etc. Experts of the SKTB Katalizatorovdirectly took part in the start-up of many production facilities of catalysts and other chemical products at plants of the Soviet Union.

Much attention in the SKTB Katalizatorov was paid to carrying out researches in the field of processes and devices. Expanded researches in this field have led to creation of new technologies for forming, granulation and heat treatment of catalysts, development and production of the unique equipment (both specific types and whole installations (lines) for catalytic production), such as, for example, production unit for receiving of spherical granules of the carrier by means of the liquid formation method, radiation and convective dryer, trial unit for receiving of the active oxide of aluminum by means of thermal dispergation method for the alumina hydrate, original designs of formation units for granules of the aluminum hydroxide of centrifugal type and drop type, units for preparation of products according to the method of thermal-mechanical and chemical activation (TMCA) of technical alumina hydrate, trial unit for synthesis of SVK-celites, unit for receiving of the ring-shaped corundum carrier, the tape dryer and the calcining furnace for Ryazan Oil Refinery, high-temperature calcining furnace for the Berezniki chemical plant and other equipment.

Production of the non-standard equipment was carried out by the own mechanical shop.

In 1986 there was the Interindustry scientific and technological complex “Katalizator” (ISTC “Katalizator”) created in the USSR. Thanks to the achieved success functions of parent organization on coordination of work for creation and development of new catalysts in the industry were assigned to the SDEB of Catalysts.

The duty of inspection of chemical enterprises using catalysts on the basis of aluminum oxide was assigned to the SDEB of Catalysts.

• To be higher than the level of technologies used for the similar purposes by other manufacturers.

• To be economically feasible.

In 1994 there was the privatization of the Special design and engineering bureau of Catalysts in the form of “Katalizator” public joint stock company (“Katalizator” PJSC), and since 1996 – “Katalizator” JSC.

In new economic conditions the “Katalizator” JSC became one of the few enterprises which was able to keep its production and scientific base.

It promoted the fact that developers of “Katalizator” JSC managed to create several new effective catalysts within the short period of time (from 1994 till 2003), which were at once demanded at the domestic market, as well as competitive at the foreign market:

• Together with the Institute of Catalysis there was the manufacturing technology developed for the aluminum-manganese catalyst ИКТ-12-40 for purification of gas emissions and catalytic combustion of methane, and there was the first contract signed with MONSANTO Enviro-Chem Systems company (USA) concerning its delivery for units of gas purification from organic compounds in the non-stationary mode. By the middle of 1999 the total amount of shipments of ИКТ-12-40 catalyst exceeded 600 tons.

• The aluminum-palladium АОК-78-21 catalyst was developed for high-temperature restoration of nitrogen oxides during the production of nitric acid – analog for the АПК-2 catalyst. In 1995 there was the first delivery to Kemerovo Production plant “Azot”. Annual shipments of the АОК-78-21 catalyst to enterprises of the nitric industry of Russia continued until recent times.

• The aluminum-vanadium АОК-78-55 catalyst for the selective restoration of nitrogen oxides in flue gases of nitric acid plants. The first batch of the catalyst was manufactured for “Nevinnomyssky Azot” JSC in 1999.

• The fine spherical composite material АОК-63-20 was developed, and on its basis since 1998 the moisture absorbing insoles for footwear are manufactured.

During these years (1994-2003) communications with our foreign partners were extended: with “COSTECH International” company (Italy) in terms of catalysts for gas purification, “DOMO CaproLeuna” company (Germany) concerning ИК-3-12 catalyst, etc. Products of “Katalizator” JSC continues to capture the domestic market: so, for example, the catalyst ИК-3-12 for purification of nitrous gases from oxygen is shipped to all enterprises of Russia and CIS countries where this process is implemented, the aluminum-vanadium АОК-78-55 catalyst is shipped to several enterprises of Russia and other CIS countries. The mastering of large consignments of ring-shaped corundum for the catalyst of oxidation of the ethylene into the oxide of ethylene, the micro-spherical aluminum oxide carrier for the catalyst of oxygen chlorination of the ethylene, catalysts of gas purification, catalysts for manufacturing of methionine, aluminum oxide dehumidifiers and other products.

Due to the development of new catalysts and their demand at the market production capacities of “Katalizator” JSC were growing. So, if in SKTB of Catalysts products were supplied generally by pilot or trial batches, then in “Katalizator” JSC catalysts are supplied already by production lots, for example, in 1995 there were about 400 tons of products manufactured and by 1999 there were already more than 550 tons manufactured.

The catalyst of dehydrogenation АОК-73-21 belongs to large-capacity catalysts and for satisfaction of the growing demand for it from domestic enterprises producing synthetic rubber and methyl tertiary butyl ether, specialists of “Katalizator” JSC have started large manufacturing scopes of the catalyst for dehydrogenation in 2000 on the basis of “ALTAYLYUMINOFOR” (Yarovoe city, Altai region) with the capacity of 1000 tons per year.

New developments of “Katalizator” JSC in 2004-2007 which found application in the industry are catalysts for industrial desulphurization: aluminum oxide catalyst for Claus process АОК-78-59, the titanium containing catalyst for Claus process АОК-78-57, the catalyst for the selective oxidation of hydrogen sulfide into Sulphur АОК-75-44 and the advanced АОК-73-24 catalyst. There are researches in the field of development of new highly effective catalysts for purification of gas emissions, combustion of methane and other fuels, catalysts for dehydrogenation of the lower paraffin hydrocarbons for carrying out of the process in the stationary layer and other products actively conducted.

Works on acceleration of production capacity of catalysts in “Katalizator” JSC are ongoing, so in 2005-2006 there was the new line for production of catalysts of dehydrogenation of the lower paraffin with the capacity of 2000 tons/year was designed and commissioned.

Today the total list of products manufactured by “Katalizator” JSC includes about 50 names. It contains aluminum oxide carriers and sorbents, catalysts for dehydrogenation of the lower paraffin hydrocarbons, series of catalysts and sorbents with the ecological appointment (including catalysts for purification of gas emissions from impurities of volatile organic compounds, carbon oxide, nitrogen oxides, ozone); catalysts for industrial desulphurization (for production of Sulfur by means of Claus method, selective oxidation of hydrogen sulfide); catalysts for production of the caprolactam, methionine and other products. The total production capacity of catalysts (carriers, sorbents) today is equal to about 2500 tons/year.

Since 2013 the “Katalizator” JSC returned itself its former name. The organization is called now as “Special design and engineering bureau Katalizator”. This name reflects the activity of the organization in the most correct way for today.